Spring into Action with Weasler! 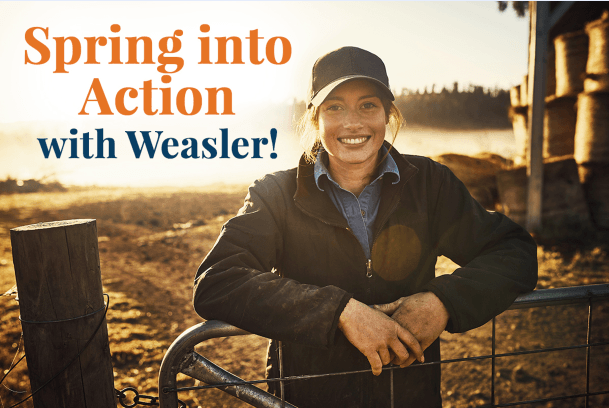 Spring is a busy season for farmers. It’s time to prep the soil for planting and get seeds into the ground. Weasler products help make tasks on farms of all sizes easier and more efficient. Our drivelines, clutches, gearboxes and other components help original equipment manufacturers and farmers safely transfer power from a tractor to a wide variety of implements.

All in a day’s work on the farm
Year-round, Weasler products are used in a wide variety of agricultural equipment. In the springtime, our innovative power transmission technology brings efficiency and speed to a full range of field preparation and planting equipment, including: 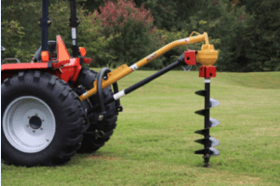 For our OEM customers, Weasler driveshaft solutions help you design and build equipment that adds signficant value to a farmer’s day. And for farmers, Weasler products give you the peace of mind to know that you are working productively and making optimal use of your valuable time.

Weasler products work hard for the life of your machines
When you purchase a new piece of agricultural equipment for your farm, there’s a good chance that you’re putting Weasler to work for you. Weasler supplies all of the major agricultural equipment manufacturers with critical components for power transmission. Most of the systems and components we design for OEMs are customized to deliver the best performance and value for each application.
And if equipment repairs are needed to your equipment, you can find Weasler aftermarket parts and service through our global distribution and dealer network. While you can handle many simple repairs right on your farm, more complex service may require agricultural mechanics. Many of the dealers in the Weasler network also provide drive shaft service in addition to parts.

Fun facts on the spring and fall equinox
In the Northern Hemisphere, spring officially arrived on March 20 this year. Called the vernal equinox, this day marked the official astronomical start of the spring season in North and Central America, Europe, Asia, Northern Africa and other regions above the equator. Similarly, Australia, South America, South Africa and other lands of the Southern Hemisphere welcomed the start of fall.

Each year, we celebrate an equinox on March 20 or 21 and on September 22 or 23. On these days, the tilt of the Earth’s axis is exactly 0°, so inclined neither away from nor toward the sun. Both days are almost equal in length in terms of day and night.

This website uses cookies to improve your experience while you navigate through the website. Out of these, the cookies that are categorized as necessary are stored on your browser as they are essential for the working of basic functionalities of the website. We also use third-party cookies that help us analyze and understand how you use this website. These cookies will be stored in your browser only with your consent. You also have the option to opt-out of these cookies. But opting out of some of these cookies may affect your browsing experience.
Necessary Always Enabled
Necessary cookies are absolutely essential for the website to function properly. This category only includes cookies that ensures basic functionalities and security features of the website. These cookies do not store any personal information.
Non-necessary
Any cookies that may not be particularly necessary for the website to function and is used specifically to collect user personal data via analytics, ads, other embedded contents are termed as non-necessary cookies. It is mandatory to procure user consent prior to running these cookies on your website.
SAVE & ACCEPT
A message to our customers regarding COVID-19Read More
+ +
Scroll to Top